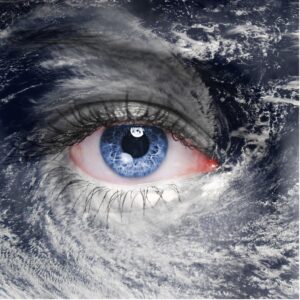 Meteorologists know a hurricane is strengthening quickly when a pinhole eye appears on a satellite.

It’s known to some as the dreaded pinhole because it tells meteorologists that there’s likely a significant hurricane associated with the storm’s small eye.

Parts of a Hurricane

Hurricanes consist of three major parts: the eye, eyewall, and rainbands. The eye is the calmest part of the hurricane, located in the center. Rain bands extend for hundreds of miles around the storm, carrying rain, clouds, thunderstorms, and sometimes tornadoes. This is the hurricane area that begins to move in a circular motion around the rest of the storm. The eyewall is closer to the center, which begins to form as the storm becomes more robust due to the formation of convection and upward-moving air. This eyewall is where the winds are strongest and heavy thunderstorms occur. In the very center of the storm is the eye of the hurricane. In fact, it is the formation of the eye of a hurricane that allows weather forecasters and meteorologists to determine that the hurricane is gaining strength. The eye appears clear with few clouds and has lower wind speeds than the rest of the hurricane. However, it is not as calm as it appears.

The entire hurricane rotates around the eye, and it is usually 20-60 miles in diameter. When this part of the hurricane hits land, it is the calmest area inside of the storm. In fact, people often think the storm has passed and go outside only to be caught by the approaching eyewall. Overwater, however, the eye of a hurricane is one of the most dangerous places to be. Eyes less than 10 miles in diameter are known as a pinhole eye. Often, a pinhole eye is associated with a powerful hurricane. Some of the most destructive hurricanes have had pinhole eyes, and major hurricanes are classified as Category 3 or stronger.

Generally speaking, the smaller the eye of the hurricane, the faster it spins. Think of a dancer spinning on the dance floor. A dancer will spin slower when their arms and hands are extended out. When the dancer pulls their arms and hands closer to their body, the dancer spins faster. It’s known as the conservation of angular momentum, and the same physics apply to hurricanes. A smaller eye typically means stronger winds. Hurricanes with pinhole eyes are most common in the Caribbean Sea or the Gulf of Mexico.

If you’re ever in a situation where you can’t or don’t want to evacuate from your Florida home during a hurricane watch, we hope you heed this warning. The eye may seem deceptively calm, but it’s important you stay indoors when it passes overhead. Stay safe!

This website uses cookies to improve your experience while you navigate through the website. Out of these cookies, the cookies that are categorized as necessary are stored on your browser as they are essential for the working of basic functionalities of the website. We also use third-party cookies that help us analyze and understand how you use this website. These cookies will be stored in your browser only with your consent. You also have the option to opt-out of these cookies. But opting out of some of these cookies may have an effect on your browsing experience.
Necessary Always Enabled
Necessary cookies are absolutely essential for the website to function properly. This category only includes cookies that ensures basic functionalities and security features of the website. These cookies do not store any personal information.
Non-necessary
Any cookies that may not be particularly necessary for the website to function and is used specifically to collect user personal data via analytics, ads, other embedded contents are termed as non-necessary cookies. It is mandatory to procure user consent prior to running these cookies on your website.
SAVE & ACCEPT
Receive a free in-home consultation Contact Us Today